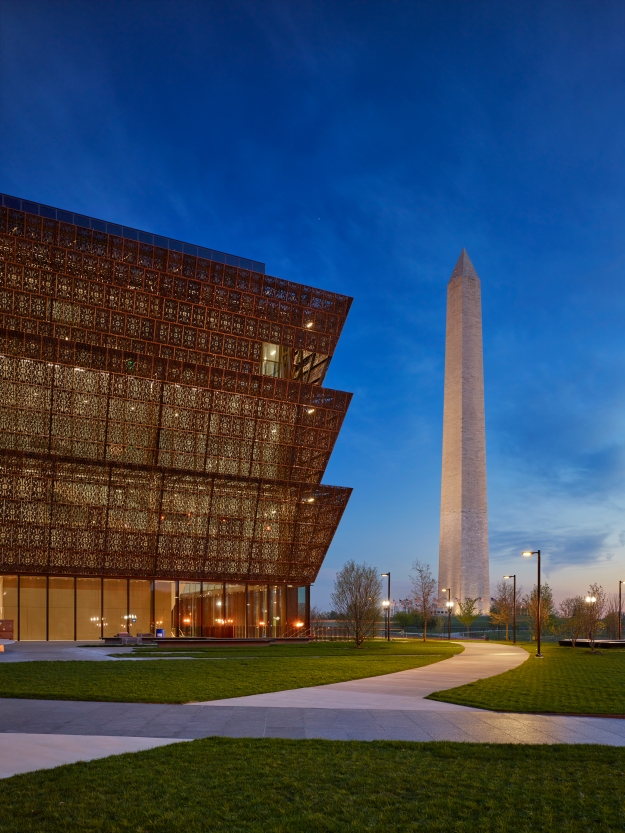 When President Obama gives the groundbreaking speech for a new project, it’s bound to be an important building. The Smithsonian National Museum of African American History and Culture (NMAAHC) is located on Constitution Avenue, adjacent to the National Museum of American History and the Washington Monument, and is slated to open on September 24, 2016.

The building is an important landmark for the nation, and is built on the last available spot on the National Mall in Washington D.C. To ensure the success of this prominent project, many partners were called together to work collaboratively during the design and construction phases; each brought a different expertise to the project. Three American architecture firms, The Freelon Group, architect of record and design team leader (and now part of global design firm Perkins+Will), Davis Brody Bond, with extensive experience in museum projects, and the local D.C.-based firm SmithGroup, joined forces. David Adjaye, lead designer of London-based Adjaye Associates, was the last to join and brought an international design element to the project. Together, they formed a group named ”Freelon Adjaye Bond/SmithGroup” (FABS) and worked cohesively to create a world-renowned museum that would accurately tell the story of the African American experience.

The museum, which encompasses 397,000 square-feet of space across 10 levels, will house exhibit galleries, administrative areas, theatre space, and storage facilities for the collection, which includes approximately 33,000 pieces of artwork and historical objects. The building design features three distinct elements: the shape and form of the corona (the three-tiered filigree envelope that wraps around the structure), the porch extension that merges the building into the surrounding landscape, and the bronze color of the corona that provides a distinctive look and strong presence on the National Mall. 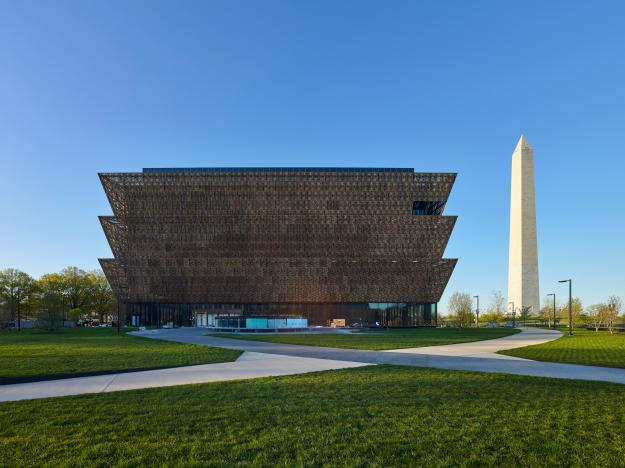 The Corona: This iconic building form pays homage to the nearby Washington Monument, closely matching the nearly 17-degree angle of the capstone while using the Monument’s stones as a reference for the NMAAHC panel proportion and pattern. Reaching toward the sky, the bronze clad corona is said to expresses faith, hope and resiliency.

“The bronze colored plates and glass-panel façade that make up the Corona is a representation of traditional African architecture using modern materials and will visually define the museum,” said Matt Wurster from Clark Construction Group, one of the general contractors for the project.

The Porch: An outdoor room that bridges the gap between the interior and exterior of the building, this feature also unites the structure with its natural surroundings. The underside of the porch roof is tilted upward, allowing for a reflection of the moving water below. This covered area creates a microclimate where breezes combine with the cooling waters to generate a place of refuge from the hot summer sun.

The Filigree: Bronze colored panels cover the tiered exterior of the building, perforated in patterns that reference the history of African American craftsmanship. Each of the 3,600 customized, bronze-colored, cast-aluminum panels reflect the design of ironwork by enslaved craftsmen in Charleston and New Orleans. The density of the pattern varies to control the amount of sunlight and transparency allowed into the interior, and the bronze color stands in stark contrast to the building’s marble and limestone neighbors.

The bronze wash of the metal panels was a monumental component of the design. Lead project manager Zena Howard AIA, of Perkins+Will explained that the color choice was discussed over the course of many years with all parties involved in the design process. Ultimately, bronze was selected as the team determined it would remain “an enduring and permanent color that would command respect for the building and the exhibits housed inside.”

Once the final color idea was identified, the new challenge of obtaining the perfect hue began. Three custom shades, African Sunset, African Sunrise and African Rose, and one standard shade of Black Valspar Fluropon® coating were used on these massive aluminum panels, each weighing around 200 pounds and stretching 4 by 5 feet.

“The color-matching period lasted for more than 18 months because we were looking for depth even more than just color since the panels were so intricate and unique,” said Del Stephens, president and CEO of Dura Industries, who served as the project’s metal panel applicators.

Each panel that was custom cast by Morel Industries was finished with five different coating layers, each a different color of the Fluropon coating, to achieve the exact bronze shade desired by the design team. Eventually, the final color was created and earned the name of “Artisan 3.5”. The individual coatings needed to hold their color across every layer on the panels, as each new additional color is built off of the last to create the final shade. Valspar’s Fluropon was the best product for this complicated job due to its durability and color retention, which will help showcase the vivid color for many years.

Extensive testing was done during the coating application process due to the sheer size of the panels, and because of the intricate design already cut into each piece. The coating was applied entirely by hand from the team at Dura Industries and each color layer was carefully inspected to make sure every part of the coating process was on track. The question arose as to whether or not this process could be replicated for the 3,600 panels, and Dura Industries answered with a resounding yes. The team worked furiously to finish the panels in an identical fashion and ship them from the workstation in Portland to the project site in Washington D.C. After a bit of back and forth, the panels and their many layers of custom colors were approved and were deemed ready for installation. “What we ended up with gave us the look of real bronze, a luminous feeling that created a dynamic and beautiful façade,” said Howard. The first panels went up in April of 2015, and the build process moved forward rapidly over the ensuing months.

“The installation process went very smoothly,” said Marty Antos, project manager at Northstar Contracting overseeing the installation process, despite the unusualness of the project. “This was a completely new way of installing panels, as the building is almost inside-out, with the glass on the inside and the ornamental structures, the metal panels, on the outside,” said Antos. The panels were installed within 6 weeks on the project site, but the assembly process took a bit longer, spanning more than one year due to the amount of materials coming to Cleveland from across the nation, including castings from Seattle, steel frames from New Jersey and aluminum extrusions from Missouri.

“This was truly a one of a kind job and something that I have never experienced before in my career with Valspar,” said Juan Campos, Account Executive from Valspar. “The finished product is simultaneously consistent and dynamic in the way that it looks.”

The filigree is an eye-catching adornment that both draws visitors in and sets the stage for the rest of the guest’s journey throughout the museum. It combines polish, artistry, creativity and persistence, just like the art, history, and culture memorialized within the building. The museum itself is a work of art, one that stands out among the historic structures to its left and right, and will act as a physical representation of the historical past of African Americans.

This site uses Akismet to reduce spam. Learn how your comment data is processed.